Junker Queen! Come On Down! Maybe? 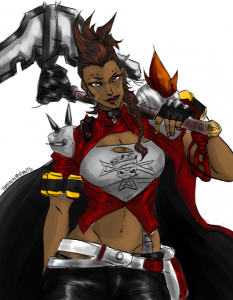 Fan theories have been popping up lately about which Overwatch character will be tapped for Hero 29.

Junker Queen, who has been the topic of fan-based theories before, is once again the favorite to be next in line.  She is known as “The Queen” and “The Queen of Junkertown”.

We’ll likely have to wait for Blizzcon later this year for Blizzard to release the identity of Hero 29, but in the meantime, fan speculation is still fun. Master Ian Gamer has released a video explaining his reasoning for believing Junker Queen will be the next hero.

Junker Queen is the cutthroat leader of the Junkers, which includes Junkrat and Roadhog.  Known for having a temper and cutthroat mentality, Junker Queen essentially runs Junktown, and will send her henchmen around to collect things like taxes.

The Queen is a charismatic and skilled fighter.  She was a fighter and champion in the Scrapyard, and eventually became ruler in part thanks to her prowess as a mech combatant. (Fisher 10/18/18)

What are your thoughts on who will be the next Overwatch Hero?