But here’s what you’re really excited to hear: The patch also includes a new Overwatch Hero: 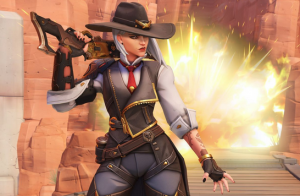 With her primary weapon, Viper, Ashe is the ideal Overwatch hero to assist in long-range shots or take down groups with high area-of-effect burst damage.

A lever-action rifle, Viper comes either semi-automatic or with aim down sights. Ashe also carries Coach Gun, a short-range, high-impact sidearm to deliver major damage, or knock herself back for added mobility.

Ashe’s Dynamite ability is a thrown explosive that detonates after a delay. It deals damage in a wide radius and sets enemies on fire for additional damage over time. She can also shoot the dynamite to detonate it early, allowing her to damage unsuspecting enemies.
Her ultimate ability, B.O.B., sends Ashe’s loyal omnic companion rushing into the fray, shoving aside the frontline to rough up targets in the backline.

As with all new Overwatch heroes, please note that Ashe’s release in Competitive Play will be delayed by two weeks.